There’s more to nature than what we humans perceive, and that part of nature also deserves our care and attention. Art can help us see what is otherwise invisible.

While we sleep, others wake. As some waters ebb, other tides are high. Light means darkness. The world never stops; it spins on – and not for our benefit or by our efforts. It’s the world’s continuous movement itself that sets things in motion.

Instead of Sleeping shines a light on the workers who take over while we sleep. In LABIOMISTA’s Protected Paradise, these workers are the moths. Thanks to them, the world here is always working. Instead of Sleeping introduces a world behind our own, a fairy tale for grownups, an invisible energy. The project consists of a small trailer with a halo of light that displays three numbers. In succession, they show the number of the various moth species identified at LABIOMISTA (in Genk), in the province of Limburg, and in Belgium as a whole. The trailer is surmounted by a luminous glass egg, a symbol of transparency and fertility. At the bottom is a blue neon light. At night, the egg attracts moths, which makes it possible to monitor their number and species. In the morning, the moths are once again released into the wild. 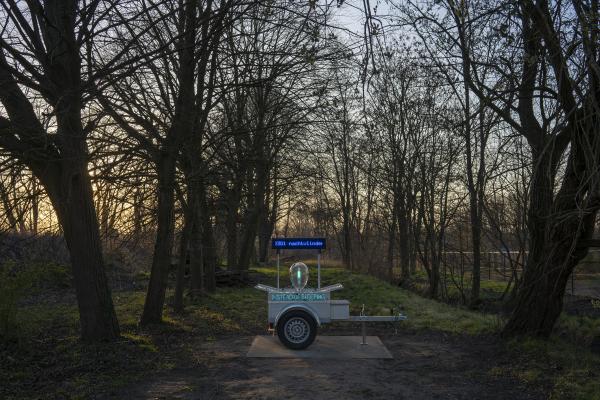 Koen Vanmechelen created Instead of Sleeping after the moth event on the night of 8 and 9th of August. Read more.