Glasstress. Window to the Future

From 11 September to 31 October 2021, the exhibition “Glasstress. Window to the Future”, organized by the State Hermitage in conjunction with the Berengo Studio of Venice, will be running in the General Staff building.

The display features more than 50 works created in glass by contemporary artists on the Venetian island of Murano. The participants include such famous figures as Ai Weiwei, Renate Bertlmann, Koen Vanmechelen, Michael Joo, Joseph Kosuth, Petah Coyne, Mat Collishaw and Laure Prouvost. Of particular interest are the pieces produced by Ilya and Emilia Kabakov, the Chapman Brothers, Jaume Plensa, Jan Fabre and Hans Op de Beeck – artists whose works have already been shown with great success in exhibitions at the Hermitage. 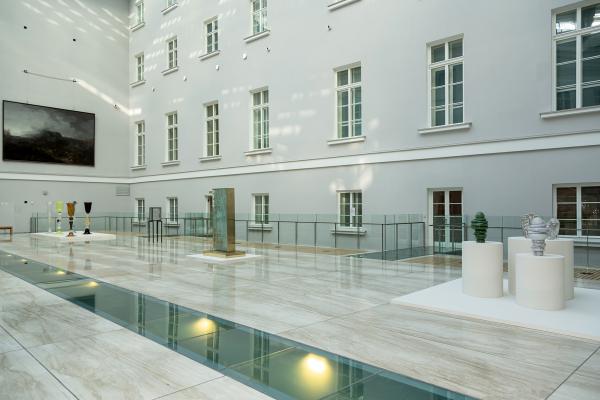 This is one of the museum’s largest exhibitions of contemporary art, occupying more than ten halls, including the monumental expanses of the Grand Enfilade and White Hall, as well as the intimate spaces of the Courtyard Gallery and the Red Halls in the General Staff building. They will become the setting for miniature sculptures, large-scale installations, chandeliers several metres in size and even video art. The works reflect the artists’ striking complex ideas and show how glass can be “pushed out of its comfort zone” and combined with other materials.

“We have long-standing ties with Glasstress. We produced a splendid exhibition in Venice as part of this project. Today Glasstress is in the Hermitage. It is a very good formula for an exhibition, making it possible to present a broad spectrum of contemporary art, famous and still not so famous artists, uniting them through the magical material that is glass. Glass is one of humanity’s greatest artistic inventions. People have learnt to imitate nature impeccably and to create no worse than it does,” Mikhail Piotrovsky, General Director of the State Hermitage, said about the exhibition.

Artists from different countries and generations reflect in their creations on current social processes, historical events, personal experience, the characteristics and philosophy of what was for many of them a new material. The broad contingent of participants will provide visitors to the Hermitage with a unique opportunity to see a cross-section of present-day artistic life around the world and to discover how traditional glass-making technologies can be used to produce works of contemporary art.

Ai Weiwei’s installation, Black Chandelier in Murano Glass, is a complex object made of glass skulls, skeletons, animal bones, internal organs and parts of crabs. It is a reinterpretation of the classic Venetian glass chandelier and turns the functions and meanings inherent in such an article inside out. The work is the artist’s reflection on the deterioration of people’s relationship with nature, the impact on the animal world and humanity’s hazy future.

Joana Vasconcelos’s Babylon was inspired by the magnificent chandeliers in Venetian palazzi. A host of long knitted tentacles intersecting one another, embellished with glass beads and spheres, pierced by dozens of LED lamps, intertwine with large round Murano glass elements. A feminine, life-affirming lace organism takes over the chandelier’s glass structure and transforms it into the incredible hanging garden that the title references.

With the aid of Murano glassblowers, Ilya and Emilia Kabakov recreated their work The Man Climbing Over the Wall, also known as The Eternal Emigrant (1995/2004), and gave fresh life to an art object that is still relevant today.

Joseph Kosuth submitted the work Any Two-Metre Square Sheet of Glass Resting on Any Wall for the exhibition. According to the artist, this is his first conceptual work. It is made as a supplement to the discourse on ready-mades, which takes as its basis “what we learnt from Duchamp”, relying on the physical properties of glass itself that reduce to naught discussions about aesthetic “content” and the subject matter for the work.

Jaume Plensa’s work See No Evil, Hear No Evil, Speak No Evil refers back to the world-famous oriental depiction of the three wise monkeys. The artist deliberately swapped the primates’ heads for the face of a young girl, though, wishing to create a different symbolic interpretation. The clue is hidden from the eye of the beholder, as Plensa’s worlds lie in the realm of dreams and illusions.

In 2009, the Berengo Studio launched the Glasstress project, within which to date more than 300 artists, designers, architects and painters from around the world, aided by Murano’s glassblowers, have embodied their own highly diverse conceptions in glass. For more than a decade, the project has been a constant companion to the Venice Biennale, as well as putting on Glasstress exhibitions in various parts of the world, showcasing the unique craftsmanship of 21st-century glassblowers that is founded upon the work of artists of centuries past, carefully preserving old traditions and investing them with a new intonation.

Adriano Berengo, President of the Berengo Studio and of the Fondazione Berengo, stresses: “Art knows no borders. It cannot be kept in a cage. It walks around freely. Despite all the quarantines, lockdowns and restrictions that we have encountered in these unprecedented times, it is evident that creative energy cannot be kept under lock and key. I am writing this with enormous pride from Murano, because in spite of all the difficulties we have managed to organize this exhibition and because everything notwithstanding we are continuing to produce great art and to bring it to people around the world.”

Dimitri Ozerkov commented: “The Venetian Adriano Berengo has brought about an incredibly important turn in the history of modern-day Murano glass. He has succeeded in combining the traditional glass industry with the phenomenon of contemporary art in its Post-Modernist version. That enabled him to take work with glass out of the traditional decorative and applied sphere, which was its historical place, into the sphere of conceptual creativity. Murano glass has turned from a run-of-the-mill material suitable for making vases, drinking vessels, chandeliers and costume jewellery into a means of self-expression for a present-day artist. The main thing in today’s world is communication, translation from one language to another. The specially created Fondazione Berengo has organized a dialogue between contemporary artists and specialist glassblowers that is founded upon interdisciplinary communication. The concept for a work is passed over from the artist to the craftsperson who proposes a method of producing it in the material. Through dialogue, a procedure for their joint work is established, along with the degree to which the author of the idea will be involved in the technological process. The final result is approved by the artist. This new format has made it possible to call to life and review through a modern-day lens the whole history and imagery of glass in world culture.”

Koen Vanmechelen, art director of Berengo Studio and one of the participating artists states: “I see artworks as two-way mirrors; reflecting on one side and transparent on the other. They are windows to an era and at the same time, can unveil how we will once be perceived by those watching us from the future since art is thought from the future. Hence, ‘Glasstress. Window to the Future’ is a contemplation on our times, a rapidly changing hinge time.”

In 2015, within the parallel programme of the 56th Venice Biennale of Contemporary Art, the Palazzo Cavalli-Franchetti in Venice became the venue for the exhibition “Glasstress 2015 Gotika”, organized by the State Hermitage in conjunction with the Berengo Studio as one of the events marking the museum’s 250th anniversary. The display included specially selected items from the Hermitage’s collection – armour, church plate, reliquaries and other works of applied art made in the Gothic and Neo-Gothic styles – that were presented in a dialogue with pieces created by contemporary artists at the Berengo Studio on the island of Murano. At that time, the idea arose to also present the project in Saint Petersburg. The intervening years have been spent in the careful selection of exhibits, as well as artists producing new works specially for the event in the Hermitage.

The exhibition “Glasstress. Window to the Future” is being held as part of the Hermitage 20/21 project, established in 2007, that aims to collect, exhibit and study art of the 20th and 21st centuries.

The exhibition curators are Dimitri Ozerkov, head of the State Hermitage’s Department of Contemporary Art; Yelisei Zakharenkov, a junior researcher in that department; and Olga Kozhura, laboratory technician in the department. 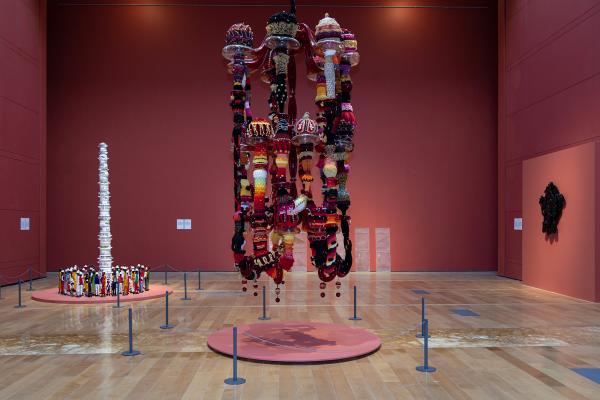 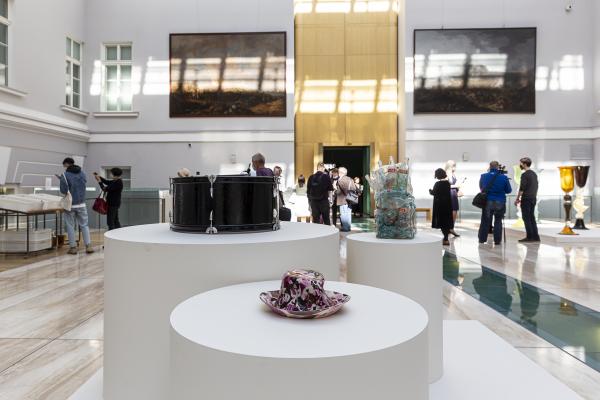 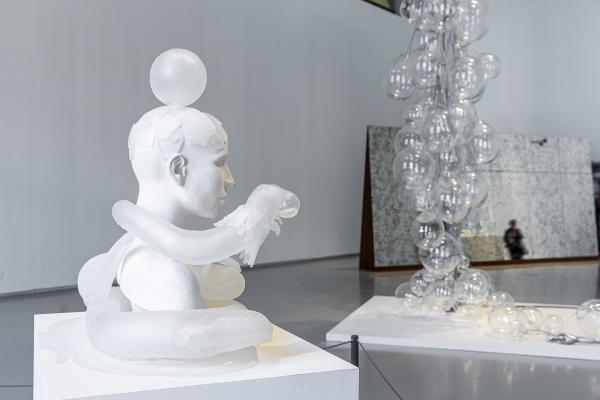 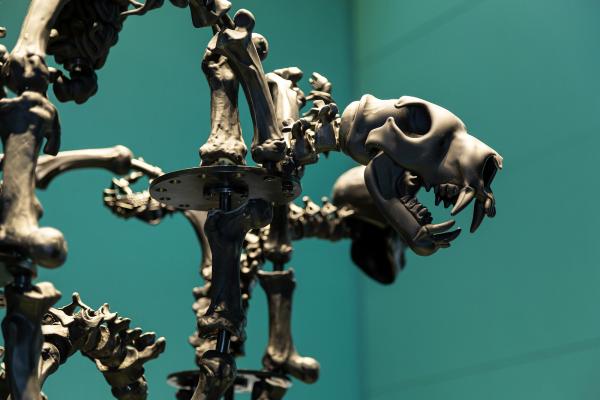